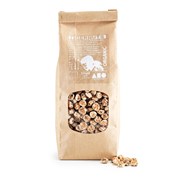 The Tigernut (cyperus sculentus lativum) or 'Chufa' as it is known in Spanish, is not actually a nut, but a small tuber. It was first discovered 4000 years ago and comes in several sizes.

Tigernuts can be regarded as the world´s first superfood as they were what our ancestors used to eat thousands of years ago. Moreover, according to research from Oxford University, they comprised up to 80% of our Paleo ancestors’ diet around 2 million years ago. Now Tigernuts have made a great comeback as one of the healthiest foodstuffs on the market. (Information provided by Tigernut Traders)

Tigernuts contain Vitamin E which contributes to the protection of cells from oxidative stress. ENJOY straight out of the bag for a healthy snack or chopped up in salads, yoghurt and muesli. 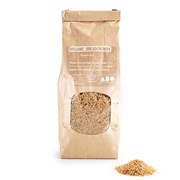 Breadcrumbs can be used to coat vegetables, fish, meat or poultry before frying. Thicken your soups, pates and sauces or rub in some olive oil to add a crunchy topping to cooked vegetables. Why not add herbs and chopped onion to make a delicious stuffing.

We use cookies to provide you with a better service. Carry on browsing if you're happy with this, or find out how to managecookies.